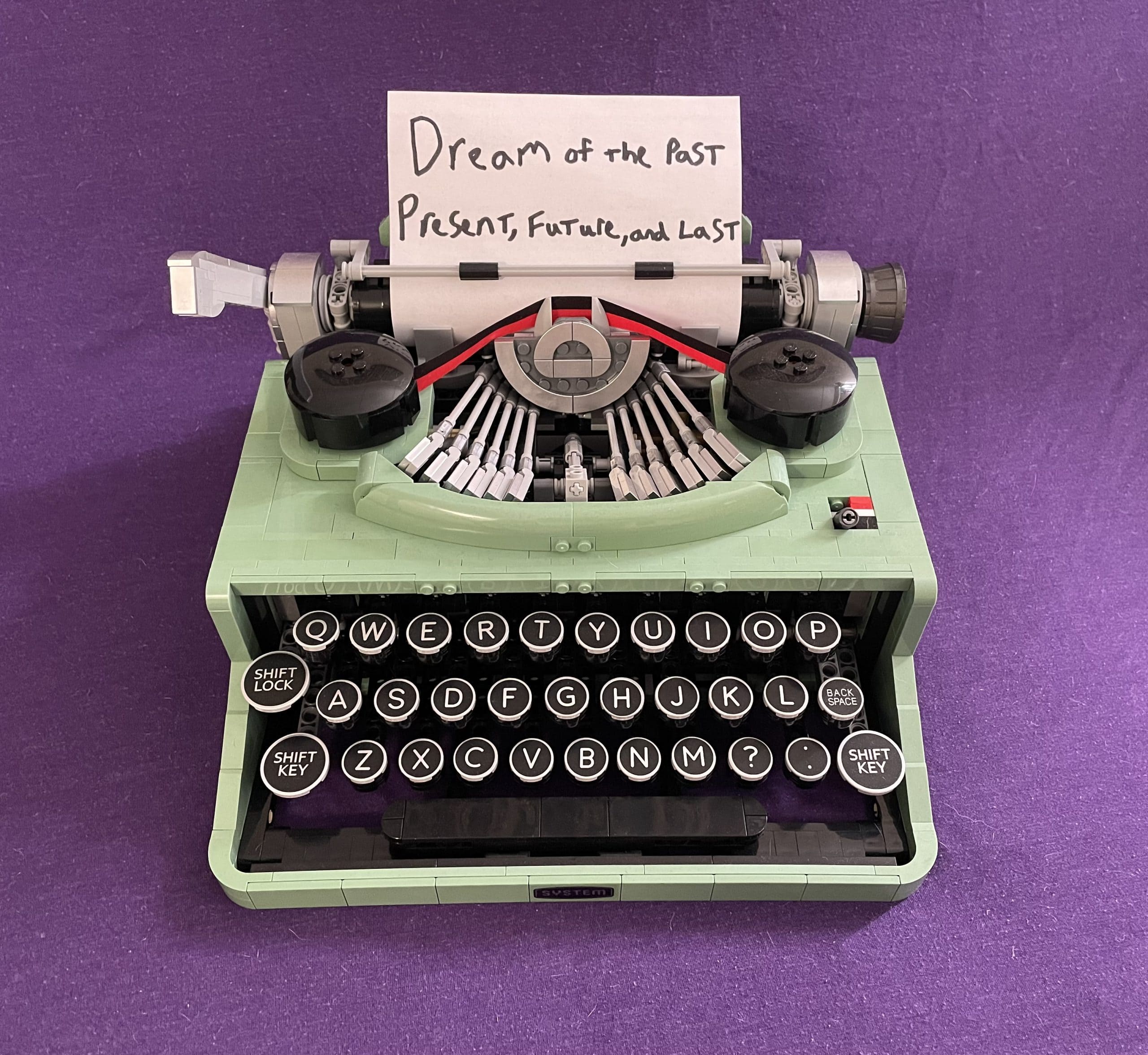 Dream of the Past
Present, Future, and Last

When I began writing, my awareness of why I was doing it was a mystery. The rush of dysphoria that it was hell-bent on delivering me ensured I turned a blind eye, momentarily impairing me from arriving at my foreseeable destination. As a result, I continued to obsess over nurturing every piece I wrote as if it were my magnum opus. Somewhere in that confusion, I insisted upon having my work appreciated. The trouble was that the group I expected acceptance from was routinely dismissive of my coined and best intentions.

Unaffected by this recent aftermath, I set out to defy the rules of rhythmical expression by enticing my fans with a somber yet beautiful trip down memory lane. Desiring an unconventional perspective independent of the typical Rupi Kaur nonsense, I reached out to renowned surrealist Matthew Revert. After a grueling collaboration absorbent of visual perfection and stories bred amassed an unparalleled amount of madness, I would then make public my prized assembled culmination.

In hindsight of that well-rounded celebratory debut, I knew my journey had only just begun. However, continuing to deny my earlier predicament, I impulsively sought friends and relatives receptive to reading and reviewing my newly revised collection of poetry, advocating my stance as an innovative storyteller. In accordance with being a self-published author, it is of tradition to ask people you are close with for support in both the pre-and-post-launching of your book. One or two graciously accepted; alternatively, most others either paid no interest or were compelled to smile, replying yes with never a review to be seen. So, naturally, I became frustrated, assuming nobody appeared pleased with what I felt was my gift for the written word.

Brushing off a beaten but not defeated advertising exchange, I focused my energy on developing an aggressive marketing scheme; determined to show the world what I had to say. After slaving away at multiple promotional campaigns, reviews abruptly rolled in at a more accelerated rate than previously received. Surrounded by excitement, I decided to share some positive observations with my dad; composed of my fellow Euphoric Wonderland admirers. While agreeing with the joy my laborious efforts invoked in my audience, he explained that inspiration should be derived from within. To that same degree, what matters most is that I produced what I consider a finely crafted accomplishment. I attempted to assure him that this wasn’t for me, but for the reader; it’s helping them discover peace in their never-ending pursuit of survival. His notion then occurred to me. Maybe he’s right. Writing makes me feel invincible. It awards me with a sense of tranquility that I can’t find elsewhere and serves to alleviate the stress that has tormented my life for nearly three decades.

Following this late revelation arising from rigorous publicity events, remnants of my struggles soon loomed on the horizon. By detriment of an unseasonably agitated state and reluctance to engage in creative tasks, I was vested with an unexpected force to write incessantly, oblivious to what my critics might think. Moving forward, I would harness a means by which the community could undo the hopeless constraints shackled affixed their wish to be sublime, through body and mind; generating refuge from which they could escape to garner comfort — without hindering my own satisfaction. I knew by the engendered fibers of my allowance that I would swiftly break all barriers to achieving what everyone else deemed impossible. And yet, I was failing to recognize the greatness I was already carrying out.

With all that said and done, some would rather I stuck to strumming the guitar, an instrument I hold in the highest regard, but lacked the suggestive behavior I instilled in memories dear erstwhile and clear. Retiring from that six-string mishap that unplayingly ceased my curiosity, I emerged to write, almost as if I was hypnotized by the formidable pen between thumb and hand possessed beyond my command.

Unmindful of my devotion to this newfound narrative, prior acquaintances would quickly brand my controversial artistic character offensive, terminating the embarrassment of many doomed-to-fail relationships. Friends have come and gone owing to an unwavering resilience they could never comprehend. But most of all, it is by virtue of what remains inward of my heart; that I am of amiable spirit. Still, I must achieve what my departed cohorts fear something bespoken vile from my lungs, or an endeavor to cry out on behalf of an undeserving concern for attention, only to spread further disruption between the lives I originally valued most.

I do what I do for my health, for myself, and for myself alone, to ultimately live a future free of the insanity that once plagued my soul. Ensuing restraint from unethical pharmaceutical mayhem has additionally paved the path toward a significantly more established mental fortitude. Plus, walking religiously, because of what I prefer to merit as a brief pause from reality, helps prevent the frantic images from nesting in my head. It’s never been about losing weight or fitting into some old jeans. Instead, it’s distracting me from the villainous entities that haunt my past that would advisably urge to anesthetize and imprison me until I can’t mouth a single rhyme or word.

So, if this is for me and I don’t “need” recognition, then why am I posting these abridged grievances and accounts on my blog for all my subscribers and, yes, former buddies that casually stroll from page to page while they irresistibly stalk me from a distance? Well, for one, I may notice those cynical spectators and discriminatory surveillant maintenance crew indulging amongst their Orville Redenbacher’s cowardly behind my google analytics. But, to reiterate, this site, my writing, and what I do is not for them. As I pointed out, it is for me, but it is also for the ones that take pleasure in what I do. Through remedy of that disclosure, I have repeatedly quoted immense dislike for my prematurely chosen friends; however, I’m gradually concluding they’re not worth discussing anymore — apart from a vague pun now and then.

Despite all that reprehensible dialogue, I exhaustedly dialed and emailed each and every one of them because I’d been so isolated and discouraged by my temporarily crippled thoughts. But as ill-luck would have it, they preferred to have nothing to do with me, and I saw it every time I contacted them. Communicating with society has been challenging while I recover, even with my vigor slowly aligning to fruition. Nevertheless, I wanted a companion (not child whining look at all my toys Kempainen) to shoot the shit while hashing over our rebellious adolescent outdated conformities. The problem was that whenever I mentioned my book or anything resembling a complacent lust for life or that I wrestle tirelessly to withstand any known obstacle emerging in my way, I would be willfully mistreated, as if my existence here on earth was meaningless. Or, be passive-aggressively degraded by misfortune of one of your recurrent stand-up comedy routines. Right, Nate? Oh, and please let aristocrat and mega-social-influencer, Jake, know I’m still waiting on that date with Amy Schumer; that’s if he’s not in the middle of selling any bent-mics to Eminem at that quieter than a graveyard homophobically managed Berkley you call that a Music shop?

I no longer solicit Nate’s, Jake’s, or anyone else’s confirmation, seeking approval for what I presently conceive is prosperity and skill inevitably possessing the unfathomable at will. I have the most brilliant person to thank for that; my father. I remember when I lived at home, tripping on a drug-dealt-killing of manic-induced antidepressants: high as a kite on a beclouded winter day, I would climb on top of my dad, threatening to tear his limbs off, frightening him into begging assistance from the blue-collar police brigade. Only now have I learned there was no control over what I said or did. By absence of his capacity to decipher my emotionally enigmatic disposition, I inarguably reconciled to welcome his maternal guilt-ridden complexities. I wouldn’t say I’m amused by how he always responds or his temper, but I have found a space to acknowledge his faults and love him unconditionally.

It turns out there is one thing worse than apparent blindness of our transgressions: refuting persistent neglect for your depravities, revealing you’re a little more than sin and less than kind. Individuals such as those maintain they’re without error. Arrogantly enough, while endorsing to rebuild all 50, or, as “one” might guess, 52 states better than before, out-for-blood chauvinistic tyrants aplenty will self-elect to disregard their own abnormalities. Shamefully disgusted by their flaccid unemployed mushroom-sized cockeyed overtaxed Viagra priapism blamed deformity, murderously driven vindictive powers that be will inversely point their finger at you and me, condemning all remaining inhabitants to a delusional perception of what they see fit. Right, Donald? Nate & Donald: two peas in a pod; imposing their illegitimate impudence as if they were God. In favor of majority rules, comprised of degenerate leaders and fools, men and women alike will aim to convince you that you’re slow, uneducated, and low; when in fact — you’re smarter than all 117th Congressional fifty-seated white-wingeth traveling in taxis to storm the Capitol on the 6th with brothers and Nazis Kool-Aid guzzling zealot incestral breeding Covid-like infectious vomiting bile reigning slew of them. Inconsiderate of our liberalistic freedom of choice, accompanied by an envious observance of success, they’ll unquestionably vote to expose your true colors when, as Inspector Harry Callahan once claimed, “Opinions are like assholes; everybody’s got one.” Sadly, those same people, too often than not, are devoid of honor, proving they have more flaws than they would care to admit.

I’m not perfect, and neither are you. However, these last few years repaired amid the sufferance of my imperfections; profiting from what I once perceived defective was hidden nearest a purposeful effective.

Every now and then, a matter of dispute demands to be unjust to concede what’s bonafidely submissive by reverence of default — a reflective deviation from our indestructible aspirations, transforming our once negative implications…into respectable situations.